Natural dietary supplements for the daily needs of the body.

Vitamins are essential for the proper function of the human body and the biochemical process.

Multi Vitamins
the elixir of well-being

Minerals
the power of the human body

Minerals contribute to: maintaining healthy bones and regulating the amount of liquids in the body. They also take part in several metabolic processes.

Natura Vita Dietary Supplements are manufactured under the strictest control mechanisms to ensure the products’ quality and consumers’ safety. The products’ ingredients are selected on the basis of their high bioavailability and absorption in order to be effective for the human body.

JMN Pharmaceutical
About Us

JMN Pharmaceutical is a greek trading company, involved in marketing and distribution of pharmaceutical and nutritional supplement products hence in the health industry and lifestyle products. JMN Pharmaceutical was founded in 2008 in Ioannina. The rapid growth of the company resulted in its expansion into the industrial area of Ioannina, where privately owned warehouses of 1,200 square meters were located until the end of 2016, where they were moved at the area of Aspropyrgos Attica until the present day. The accountant base as well as the order department of the company remains in the center of the city of Ioannina. In 2008 the sales and marketing department was added in Athens, which is responsible for promoting products at both retail and wholesale. In 2008, the R&D department was established, aiming at the development of innovative formulae. Today JMN Pharmaceutical is active in both Greece and the abroad.

Place your computer mouse on the circle and learn more about all the vitamins and minerals. 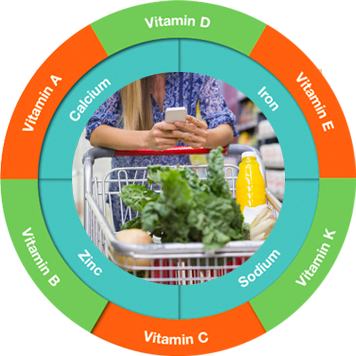 Natura Vita Dietary Supplements have a wide range of natural ingredients that meet every dietary need of the human body.

The natural solution for the body protection.

Natura Vita Dietary Supplements are available in a wide range of doses and different combinations.

Natura Vita Dietary Supplements are manufactured in plants that have a GMP (Good Manufacturing Practice) Certification.

Natura Vita Dietary Supplements are available in a wide range of doses and different combinations.